The cryptocurrency has barely budged in the past 24 hours. With a total cap of $1.11 trillion, it has slid down by 0.5% in the past day, but is up by 6% in a week. It remains down, however, by 9% in the last 30 days, meaning there remains plenty of scope for further rebounds. To this end, this article collects the 5 best cryptocurrency to buy on cheap prices. These are coins that are selling at as big discount, and so show potential for outsized rises.

IBAT is 31% down from its all-time high of $0.00554060, recorded 14 days ago. This may be disappointing for some investors, but it’s encouraging to note that, since gaining its first listings, it has remained within a fairly narrow range, and has fluctuated too wildly, like some new coins.

For the uninitiated, Battle Infinity is a play-to-earn crypto gaming platform that sold out its presale within a couple of weeks. Running on Binance Smart Chain, it announced its first listing, on PancakeSwap, on August 17th. Since then it has gained a listing on CEX LBANK Exchange, with deposits already live. It has also just listed on DEX Coin98, something which will open it up to further liquidity and demand in the coming weeks.

If #Coin98Exchange is a glorious galaxy 💫, these are 5 new stars that shines recently✨✨

With its development team largely based in India, Battle Infinity’s sports-themed gaming metaverse will feature a growing range of games. The most interesting of these is probably the IBAT Premier League, in which users will build their own fantasy sports teams made up of NFTs of real-life athletes. Said teams will compete against each other, with winners receiving crypto-based rewards.

In time, Battle Infinity will also grow to incorporate other crypto and NFT-based games, while also introducing its own competitive staking feature, its own DEX, and an NFT marketplace. Once complete, this will provide a deep ecosystem, and could help IBAT become a big altcoin in time. This is why it’s one of our 5 best cryptocurrency to buy on cheap prices.

TAMA is arguably one of the most hyped and talked-about new altcoins in the market. Running on Ethereum, it’s the native token of the pet-themed Tamadoge metaverse, where users will be able to mint NFT-based pets, nurture them and battle them with each other.

Its presale kicked off in early August, and is due to end soon. Even though it has already passed its initial target of $2 million, it continues selling more TAMA and passing new thresholds, with the latest count putting it at $14.5 million raised. Still, this sale hasn’t ended just yet, and interested investors can purchase TAMA tokens via its official website in exchange for either ETH or USDT.

ANOTHER MILESTONE ACHIEVED BY THE #TAMADOGEARMY

Despite looking much like a meme token, TAMA has strong fundamentals, which come from its surrounding metaverse. The latter offers play-to-earn features, with players able to battle their Tamadoge pets and earn rewards for doing so. On top of this, they can also sell their NFT-based Tamadoges on the secondary market, offering real potential for profits.

TAMA has also announced its first exchange listing, which will be on LBANK once the presale ends. This is impressive in light of the fact that its presale hasn’t even ended yet, as is the fact that Tamadoge already has over 62,800 followers on Twitter. This is why it’s one of our 5 best cryptocurrency to buy on cheap prices.

Join the #presale now and be ahead of the game 😎

Reminder: We already confirmed LBank listing after the presale, is it worth getting in early? You do the math 👀🔣

Grab some $TAMA now at https://t.co/8e6aPKHhGC and brace yourself for a nice ride 🦾 pic.twitter.com/0tRG9K1Lwi 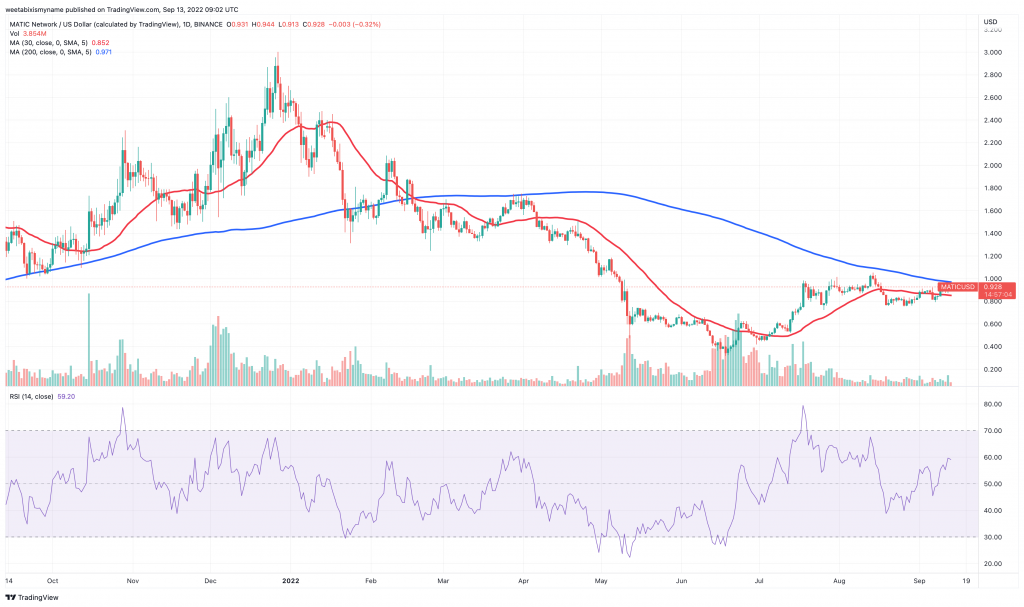 MATIC’s indicators hint at the beginning of a rally. Its relative strength index (in purple) has climbed to 60 in the past few days, indicating good — but not overbought — momentum. Likewise, its 30-day moving average (in red) is close to forming a golden cross with its 200-day (blue), suggesting a breakout.

Regardless of timing, MATIC is set up very well for the future. As the biggest layer-two scaling network for Ethereum in terms of value locked in, it’s likely to benefit from Ethereum’s upcoming Merge (due at some point tomorrow). In the short and medium, the Merge won’t improve Ethereum’s scalability, although it will likely increase demand for its platform. As such, much of the increased traffic for Ethereum will go through Polygon, boosting demand for MATIC.

On top of this, MATIC has benefited from a number of Polygon upgrades in the past couple of months. For instance, Polygon’s team announced the launch of Polygon zkEVM on July 20th, a layer-two scaling solution that uses zero-knowledge proofs and is fully Ethereum Virtual Machine-equivalent. It has also revealed a number of partnerships in recent weeks, including with Starbucks. This growth is why it’s one of our 5 best cryptocurrency to buy on cheap prices right now.

A unique experience that enables you to earn and buy digital collectible stamps and unlock new, coveted coffee experiences. 🌟 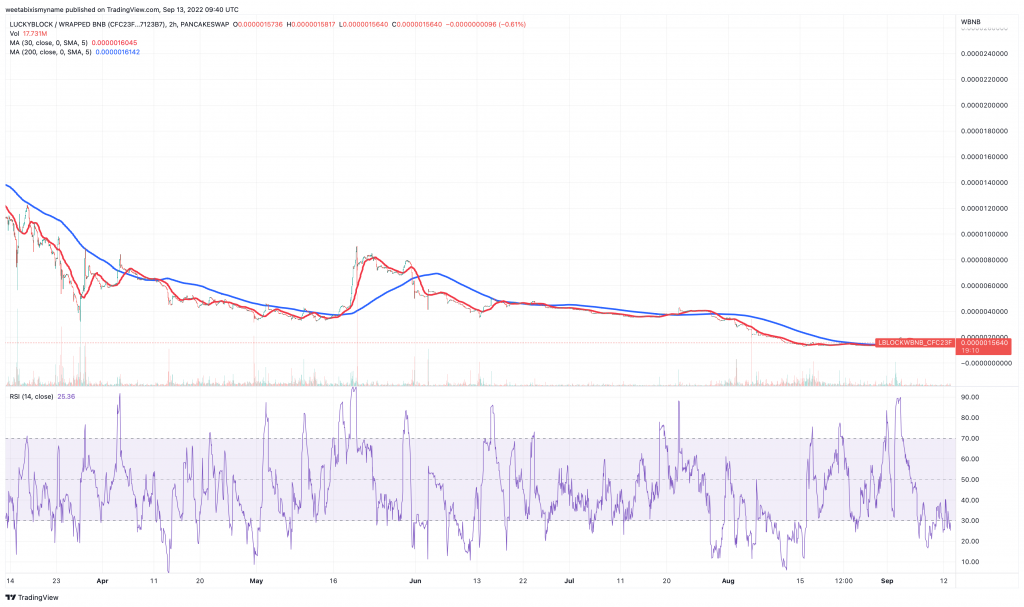 LBLOCK’s indicators suggest a capitulation. On the other hand, its RSI shows that now is likely a good time to buy, in that the market is overselling the coin. And in the past, when its RSI has been below 30, it has enjoyed a rebound in the next one or two days.

It’s worth remembering that LBLOCK remains a very new coin, yet it’s growing quickly. It has recently gone live on Gate.io, while it has also been listed on Uniswap, MEXC Global and LBANK Exchange in the past few weeks. Such listings will no doubt be positive for it in the long-term, affording it more price stability in time.

Would you like to enter the Lucky Block spaceship? You can do so now by buying V2 $LBLOCK on Uniswap! 🚀

Things look good for Lucky Block also in terms of its fundamentals. Now running on Ethereum, it’s a crypto games platform that enables users to enter prize draws with a minimum guaranteed payout of $50,000. These prize draws launched at the end of May, while Lucky Block has expanded its ecosystem in the past month or so to include various NFT-related competitions.

Gm! Start your day by grabbing one of the Platinum Rollers Club #NFTs 🌤️

One of Lucky Block’s most appealing features is that holders of LBLOCK can receive rewards for voting for charities that will receive a 10% portion of each prize fund. This is more or less equivalent to a form of staking, meaning that investors have the opportunity to earn a profit passively by just holding the coin.

Aside from Ethereum, Ethereum Classic and Polygon, Ravencoin is likely to be one of the biggest beneficiaries of tomorrow’s Merge. Its native token RVN is already up by 15% in anticipation of the upgrade, to $0.061789. This represents a 58% rise in a week and a 109% surge in a fortnight. 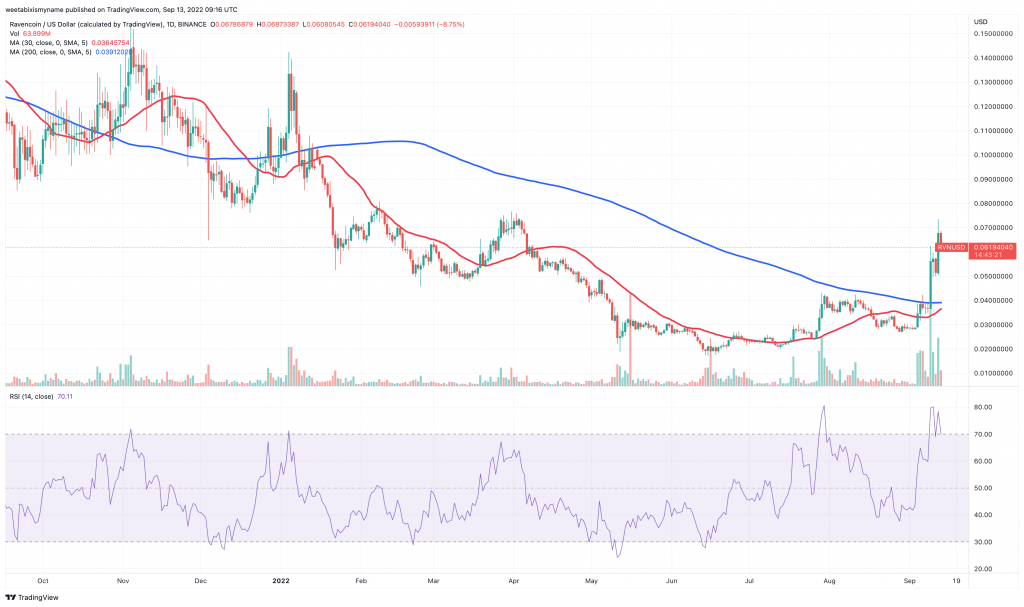 RVN’s indicators are very strong right now. Its RSI has topped 70 and even reached 80 in the past couple of days. This may suggest that its rally is due to run out of steam soon, or it could be the sign of some very strong momentum. That there is more rallying left to take its course is suggested by its 30-day average not having overtaken its 200-day yet.

As the market is seeing with Ethereum Classic, Ravencoin is likely to witness an influx of former Ethereum miners. It has seen its tweets per day rise from barely 150 at the end of August to over 2,000 in the past few days, indicating rising interest and demand. It’s not clear how long this interest will last, but with Ethereum’s miners having to go somewhere, it could be for the longer term.

In contrast to Ethereum Classic, which is a layer-one utility chain, Ravencoin’s blockchain is geared towards the issuing of tokens. This arguably makes it a little more niche and specialised than Ethereum Classic, but such a fact clearly hasn’t deterred new investors just yet.

Your capital is at risk.

Sep 30, 2022
A community-driven platform is making a bold prediction for the future: the worlds of DeFi and NFTs will eventually…

Will Apple’s 30% commission on NFT sales be detrimental?

This MEV bot gained and lost over $1M in 1 hour