Is Yooshi Listed on Poocoin?

Yooshi is a decentralized meme token that connects P2E games and players on Binance Smart Chain. Poocoin App is a leading chart site that focuses on the BSC network that lets you track, buy or sell tokens relating to your wallet on BSC.

And, following this realization, as pertaining to their ties to Binance Smart Chain, we get to understand how fundamental this type of question is.

So, how far beyond the BSC, does the bond between Yooshi and Poocoin stretch?

Has Poocoin Listed Yooshi or Not?

On the 31st of October, the same question troubled a Twitter user who goes by ‘Dude’, prompting them to send the following tweet.

And moments later, @Saligia, the founder of D’licious Guild (DLS), came to his rescue with the following reply. 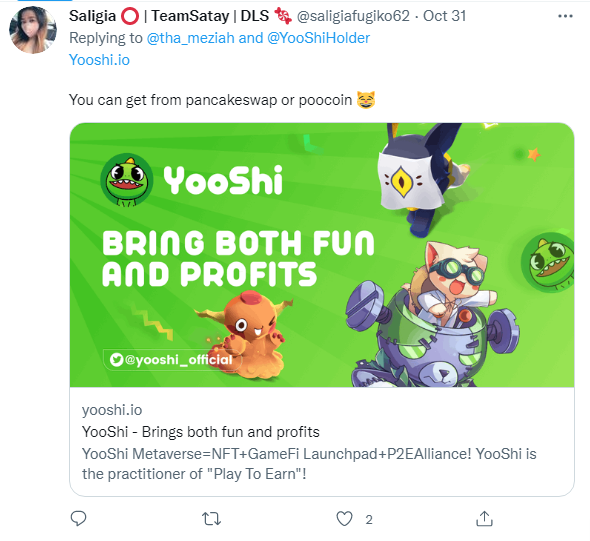 And we confirm this information to be correct.

Yooshi is listed on the PooCoin.App site and appears to have been listed for some time now.

Some users are even going as far as comparing it to high-ranking coins with a far much greater market value like the Shiba.

The number of people using the popular PooCoin site is significantly increasing, thus making it necessary for the site to make room for every relevant token on PancakeSwap.

Despite its name being shitty, the site is anything but this.

And with the recent release of newer premium features for their premium users, PooCoin is will definitely blow up. The features will allow anyone the luxury of not only tracking all the buys and sells of their wallet on PooChart. But also, any other wallet for the buys and sells; you could view any wallet and the coins it holds.

This is deemed a massive game-changer for the Binance Smart Chain Network as the features of Taxes, Tracking, and anything else is available for you to manage your portfolio.

You only need to access the feature to have $300 in PooCoin/BNB liquidity on Pancakeswap.

How to Invest in Binance Coin?

Feb 1, 2023
Join Our Telegram channel to stay up to date on breaking news coverage The value of the SOL token rose from…

Twitter Prepping For Payments, Could Include Bitcoin And Crypto: FT

Dell and IOTA partnership for sustainable energy and digital cities…