Earlier this month, several influencers, including members of FaZe Clan and Ricegum, were accused of hyping a pump and dump token called Save The Children.

Paul’s efforts have triggered a further discussion on the role played by social media celebrities within the crypto space. More so, how meme tokens are at odds with an industry striving for credibility.

What is Dink Doink?

Dink Doink’s tagline is “cartoons, memes, and good times with the community.”

Its whole selling point centers around a South Park-inspired cartoon featuring Logan Paul, Dink Doink, and a character called Dani, who is Paul’s assistant. The roadmap mentions music videos, a movie in the works, and “strategic episodes.”

“Dink Doink aims to be the first ever decentralized media franchise, where token holders receive an NFT for every episode that drops.”

DINK is a BEP20 token available on PancakeSwap. So far, the only crypto trading pair available is DINK/BNB.

According to Dink Doink, the max supply is 10 quadrillion tokens (quadrillion = 1,000 trillion), the market cap is $1.7 million, and there are just under ten thousand addresses in existence.

Since then bears have taken control, tanking the price sharply. While the July 4th weekend saw some reprieve with stabilization of selling, last week saw a continuation of bear activity, dipping the price to $0.0000000001684 at the time of writing. 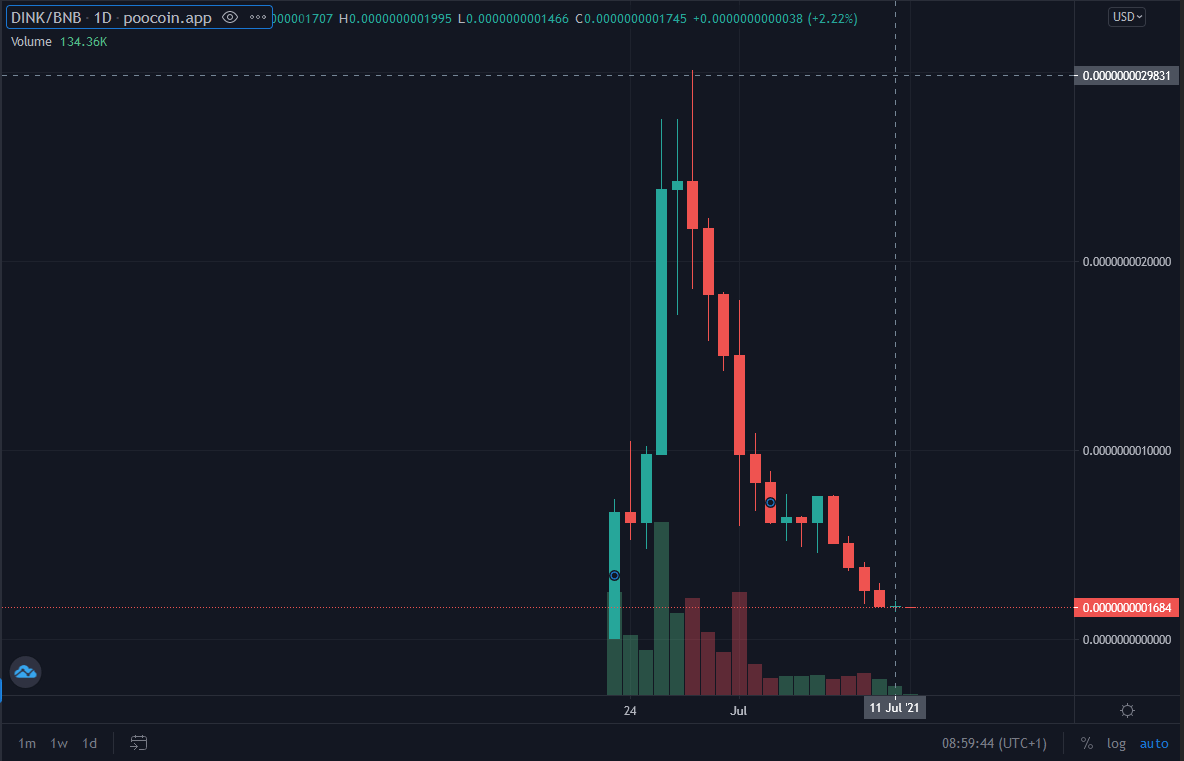 The project demonstrates an understanding of its target market, in rewards for “sitting on your ass and doing nothing.”

Expanding on this further, Dink Doink transactions attract a 10% fee. 5% gets distributed to token holders in proportion to their holdings. While the remaining 5% goes to the PancakeSwap liquidity pool. There is no information on who controls this pool.

Dink Doink is also incredibly lazy. In the spirit of this laziness, Dink Doink built a token that will reward you for sitting on your ass and doing nothing. No staking, no vaults, no bullshit. Just sit back, relax, and watch your $DINK bag grow bigger and bigger!

YouTuber Coffeezilla, who has posted several videos on crypto scammers recently, said Dink Doink lacks any useful purpose. While the same could be said of any meme crypto-token, Coffeezilla raises objections to Paul’s influence in this situation.

Although Paul passes himself off as a random investor who stumbled upon this token, Coffeezilla accuses Paul of creating Dink Doink.

“In general, he presents himself as an interested but unaffiliated investor in this coin…

But it turns out this is incredibly misleading because Logan Paul is far from just a guy who found out about this coin like anyone else because in a podcast with the Dink Doink CEO, he said Logan Paul created the thing.”

Paul has openly admitted that Dink Doink is, in his words, ridiculous and dumb. But like many before have warned, people’s free reign to create pump and dump tokens will only incur greater regulatory scrutiny on the entire crypto space.

‘BitScam’ and ‘CloudScam’ end up scamming 93,000 Bitcoin and Ethereum users