Space MMOs venture into the world of NFTs

Ever since Johannes Kepler and Jules Verne invented the space genre it has kept expanding the frontiers of our imaginations. In recent decades it has expanded into computer games, MMO games, and now into the world of NFTs and the metaverse. Players can create their own characters and stories, leading rebellions against whole worlds or fighting aliens on the fringes of the galaxy. But not all that shimmers is dilithium. Some NFT games promise a new frontier but so far have delivered little more than stardust.

“The real challenge and the real opportunity is keeping our focus on gameplay … , when we start to forget about making great games and start thinking about games as a vehicle or an opportunity for something else, that’s when we stray a little bit further from the path”, Sid Meier, founder of the Civilization game franchise.

NFTs promise to take game economies to the next level by removing several of the problems with in-game currencies and trading.

NFTs provide proof of ownership of in-game items. There have been several reported cases of theft of valuable items within games and there must be many more unreported cases.

Combined with digital currencies (game specific or general crypto currencies like Bitcoin), NFTs also make trading items much easier. Sellers don’t have to rely on finding buyers in-game, they can sell the item outside the game. In the future, it may be possible to transfer NFT items between games, which creates a bigger market and increased liquidity for items.

NFT trades also remove the problem of fraudulent transactions, where the seller transfers an item but the buyer does not send payment or vice-versa. Blockchains transactions which involve NFTs and crypto currencies enable an instantaneous exchange of the coin and NFT. This can even occur between wallets on different blockchains – an atomic swap.

NFTs with smart contracts also allow for exciting new forms of transactions for games. Smart contracts allow contract terms to be automated in the blockchain so that enforcement is guaranteed. Items can be sold with a residual percentage share so that the original seller or creator benefits from future sales. There is also the potential for contracts for paid services within a game. If a term is codable it can be enforced. 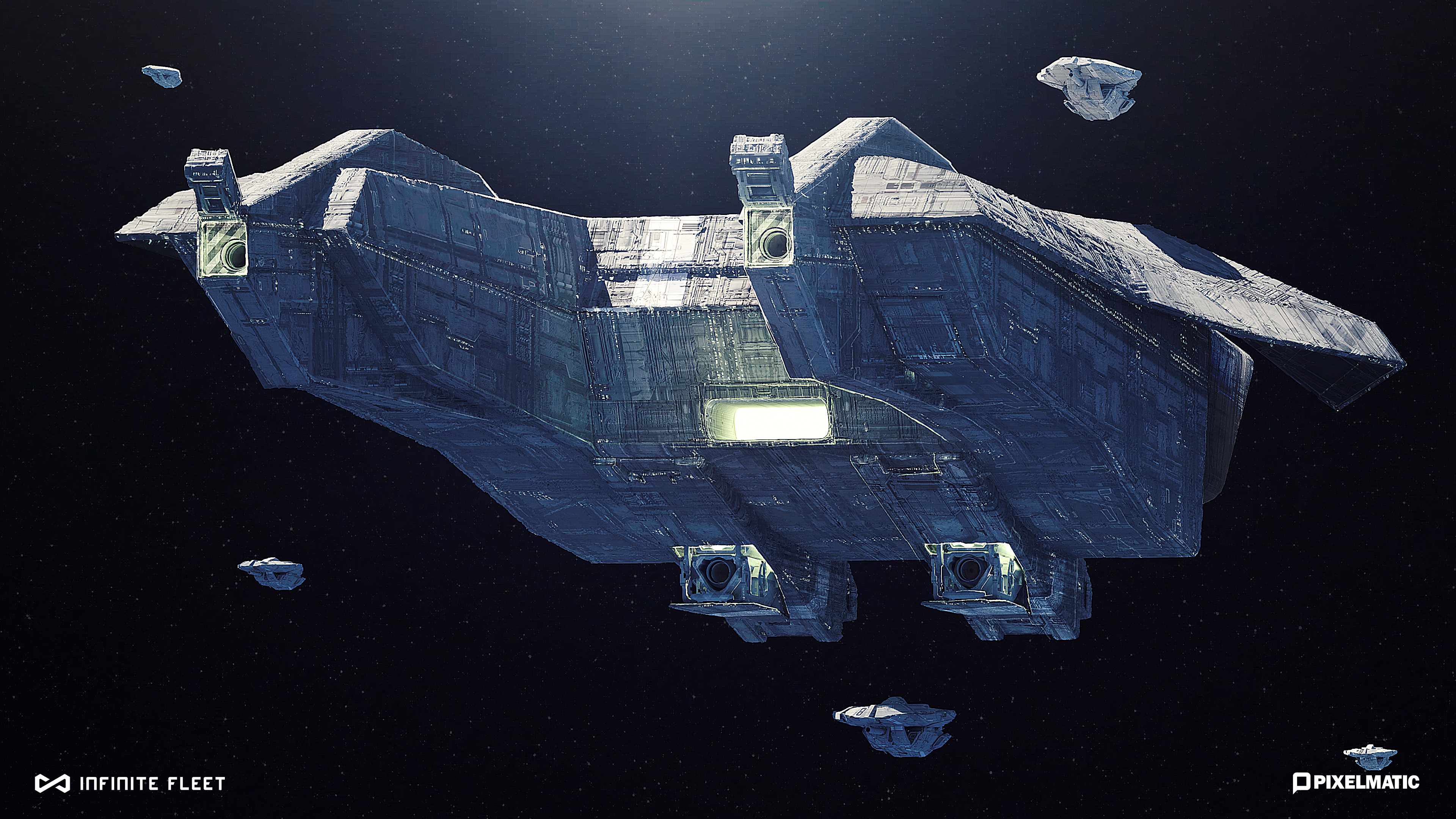 CSC (Crypto Space Commander) was founded in 2015 by LA gaming studio Lucid Light. Early access was launched on Steam in 2019. However, in June 2021 Hong Kong’s Animoca Brands were brought in to revitalize the game because of a stagnant user base, a lack of recent development, and criticisms of a weighting towards pay-to-win.

Infinite Fleet is a game of interstellar fleet combat that pays homage to 1980s anime such as Space Battleship Yamato. Players are a commander for the United Sol Federation fighting against the Atrox alien threat. Players start with a single ship but can build a whole fleet. Missions can even be run when players are AFK (Away From Keyboard).

Infinite Fleet is the brainchild of gaming and crypto veteran Samson Mow who founded Pixelmatic in 2011. Mow cut his teeth at Relic Entertainment helping to develop titles like Company of Heroes and later Might & Magic when he joined Ubisoft.

Infinite Fleet is produced by a small but hardcore team at Pixelmatic who are punching above their weight. The game went into Alpha release in March 2021 and entered Beta release on 28 July 2022. New updates seem to be popping regularly and the team are committing to a major release every two months. It’s worth noting that Infinite Fleet is one of the few games that’s delivering on promises and exists in an actual playable state.

Players will earn INF crypto tokens from playing the game and participating in events. The tokens use the layer-2 solution Liquid on the Bitcoin blockchain and can be traded outside the game. However, the game can be played with no need for players to interact with the game’s cryptocurrencies –  it is totally at their behest.

“People should only buy these things if they plan to use them in the game itself,” Samson Mow.

In addition to Mow’s gaming chops, Infinite Fleet is also being backed by Tether, crypto industry’s heavyweights. In 2020, Infinite Fleet also raised funds for the project by issuing a Security Token Offering – a token based security.

Star Atlas is set in a futuristic universe where three factions vie for territory through space combat. Players can choose to join one of the three factions: one human and two alien.

Star Atlas released its first ship JPEG NFTs in September 2021 and its game trailer in October 2021. The trailer was made by Hydra Studios. It has been reported that the graphics in the actual game will use the Unreal 5 engine. A limited mini game “SCORE” is currently available in which players can click a button to send their JPEG NFTs on missions and receive rewards.

A DAO (Decentralized Autonomous Organization) and accompanying POLIS tokens were released in July 2022 to allow players to vote on certain governance issues for the universe.  A “Galactic Marketplace” has recently been released and allows for trading of the game’s NFTs. According to Star Atlas’s website, the game’s crypto currency ATLAS will be play-to-earn.

Lead developers ATMA have a large team of over 200 employees and outsourcers and are backed by crypto exchange FTX and billionaire Sam Bankman-Fried. The NFTs use the Solana blockchain and decentralized finance (DeFi) features are provided through Serum. Early investors are excited to see the eventual release of the promising game.

Fans of the space combat genre are certainly spoiled for choice. With the release of new blockchain games they will have the freedom to trade and govern their favorite universes. Like any new enterprise, some games are more advanced than others, and it remains to be seen which titles can gather a critical mass.

Disclaimer: This article is provided for informational purposes only. It is not offered or intended to be used as legal, tax, investment, financial, or other advice.

Quant Adds 10% In 24 Hours While Macro Uncertainty Pulls Others

Bitcoin Price Holds Above $23,000 – Will February Bring a New Surge?

Jan 29, 2023
Join Our Telegram channel to stay up to date on breaking news coverage A recent survey from Pureprofile has…

Silvergate Capital announces the suspension of Series A preferred…