Why Bitcoin Drawdown May Still Not Be Painful Enough For Bottom

The Bitcoin supply in profit metric could hint that the current bear market hasn’t been painful enough yet for the cyclical bottom to be formed.

Bitcoin Supply In Profit Has Plummeted To 45% Following Crash

As pointed out by an analyst in a CryptoQuant post, all the historical bottoms took place when the profit in supply dipped below 40%.

The “supply in profit” is an indicator that measures the percentage of the total Bitcoin circulating supply that’s currently in some profit.

This metric works by going through the on-chain history of each coin to see what price it was last moved at. If this previous price for any coin was less than the value of BTC right now, then that particular coin is carrying some profit at the moment.

The indicator takes the total of such coins and then gives the percentage based on the total number of coins in circulating supply. The opposite metric is the “supply in loss” and it’s simply calculated by subtracting the supply in profit from 100.

Related Reading: Despite Huobi Token’s 24% Decline In Past Week, Whales And Sharks Continue To Buy

Now, here is a chart that shows the trend in the Bitcoin supply in profit over the last several years:

As you can see in the above graph, the percentage of the Bitcoin supply in profit has plunged recently due to the crash kicked off by the collapse of the FTX crypto exchange.

Following this plummet, the indicator now has a value of just 45%. This means that more than half of the total supply has now entered into a state of loss.

The chart also highlights the values of the metric that were observed during the bottoms of the previous two halving cycles.

It looks like less than 40% of the Bitcoin supply was carrying some unrealized profit in both of those bear market lows.

If the same pattern forms this time as well, then it would mean the supply in profit still has to drop by more than 5 units in order to hit the historical bottom values.

Such a shift in profitability can only take place after more decline in the price, which implies pain isn’t quite over for Bitcoin investors just yet.

At the time of writing, Bitcoin’s price floats around $16.6k, down 6% in the last week. Over the past month, the crypto has accumulated 14% in losses. 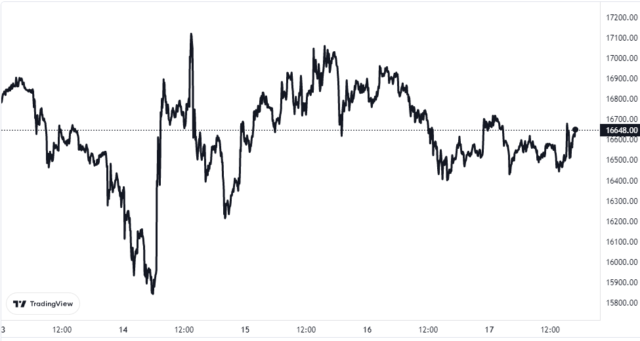 ZOOMEX Organizes World Cup Campaign with a Prize Signed by…

Can Cardano Be Next Leading Blockchain for NFTs?

Nov 25, 2022
Sabrina Martins Vieira Second only to Ethereum, Cardano has everything it needs to become next highlight in NFT…

Chainlink Extends Accumulation By 200 Days; Will Bulls Push For A…